Cops line up to take custody of SpeakAsia accused

MUMBAI: Soon after the five men arrested in the multi-crore SpeakAsia fraud were granted bail and released from the Arthur Road jail, a police team from Mira Road took them into custody. Now, police teams from across the country, including those from Pune, Delhi, Rajasthan, Haryana, Madhya Pradesh and Goa, have queued up to take them into custody for the fraud.
The five members of the Singapore-based company were first arrested by the Mumbai EOW. They are SpeakAsia COO (India head) Tarak Bajpai (36), Rajeev Mehrotra, technical head for the portal, Shaikh Rais Latif (32), assistant for daily portal operations and in-charge of regular pop-ups, Ravi Janakraj Khanna (44), finance accountant and Deepankar Sarkar- an active promoter from Raipur. The company is believed to have duped investors of Rs 14,000 crore. It had 150 franchises across the country and 18 in Maharashtra. "At the time of the arrest of SpeakAsia officials in the last week of July, the company had over 20 lakh investors in the country. A red corner notice is likely to be issued against its senior officials soon," said a Mumbai police officer.

Email ThisBlogThis!Share to TwitterShare to FacebookShare to Pinterest
Labels: Cops line up to take custody of SpeakAsia accused

MUMBAI: The Bombay high court on Wednesday criticized the Economic Offences Wing (EOW) for its "total inertia and inaction" while dealing with scamsters who dupe people of their life savings through quick return investment schemes.

A division bench of Justice Ranjana Desai and Justice Rajesh Ketkar was hearing public interest litigations against SpeakAsia and a similar Ponzi scheme floated by Rahul Patil of Symbiosis Group where "Rs 25-30 crore" were collected from investors.

The judges had barely finished hearing the SpeakAsia case and directed the EOW to file an affidavit on the preventive steps it proposed to take to curb such offences when the Symbiosis case came up for hearing.

The petition, filed by Vijay Gehi, urged the court to transfer the case to the Central Bureau of Investigation (CBI), saying despite submitting all details about the accused to the police a year ago, nothing was done. "We gave them (the police) names, addresses and telephone numbers of the accused. They did nothing," said Gehi's advocate, adding that the Symbiosis website is yet to be blocked. "Subsequently, the accused withdrew money from their bank accounts," said the lawyer, who also pointed out that not a single arrest was made in the case even though a lower court had rejected the anticipatory bail plea of the accused. "How ineffective you (EOW) are! These offences are worse than murders," said Justice Desai.
Gehi's advocate said his client had lodged a complaint with the Shivaji Park police but nothing is being done. A doctor, who had invested Rs 1.25 lakh in one of the schemes, lodged a complaint on February 19, 2010, with the Versova police, the lawyer told the judges. A year later, the case was transferred to the EOW.
Terming the delay by the Versova police in transferring the case to the EOW and their failure to freeze the accounts of the accused "distressing", the judges said, "Had the money been seized immediately, perhaps such a situations would not have risen."
"It is high time the police department, in coordination with the state government, took preventive steps so that common people do not fall prey to such scams," said Justice Desai. The judges directed the ACP and DCP (EOW) to take "prompt steps" and file a reply.
The judges, while hearing the SpeakAsia case, expressed anguish over how "persons who are cheated are sent from one police station to another". "Don't harass a person who's been cheated. Why don't you take down his/her complaint," asked Justice Desai.
Taking note of the fact that the lower court while rejecting bail plea of the accused last month had directed that its order be placed before the additional commissioner of police and the deputy commissioner of police (EOW) so that they could guide the investigating officers, the judges said, "This is yet another matter where the police have shown total inaction and inertia," they added.
Public prosecutor Pandurang Pol replied that cases about Rs 50 lakh go to EOW. But judges said in such matters speed is the essence. "There should be quick relief," said Justice Desai.
SpeakAsia Help Line Speak Asia Online Scam SpeakAsia Fraud
Cops line up to take custody of SpeakAsia accused
Times of India
MUMBAI: Soon after the five men arrested in the multi-crore SpeakAsiafraud were granted bail and released from the Arthur Road jail, a police team from Mira Road took them into custody. Now, police teams from across the country, including those from ...
MLM companies try forex deals, commodities training packages to lure new members
Moneylife Personal Finance site and magazine
The catch here is that the income on the principal decreases as level of your down line increases. So in level one, you get 4% income of the principal amount of your down line, in the next level it comes down to 2%. This goes to level 25, ...
Multi-level marketing firms under probe
Livemint
The investigations come in the wake of a public interest case filed against multi-level marketer Speak Asia Online. On 24 August, the court directed the police to file a reply by 7 September. Meanwhile, after initiating an investigation against Speak ...
One more arrested in connection with Speak Asia scam
Moneycontrol.com
Tulsient looked after financial affairs of Speak Asia and also played an important role in the controversial company's online surveys, he added. Manoj Kumar, CEO of Speak Asia, is a partner in Tulsient and is wanted, police said. ...
Five accused in Speak Asia scam get bail
Zee News
Mumbai: A local court granted bail to the five accused in the alleged Speak Asia scam on certain conditions on Thursday. The five, including Speak Asia's Chief Operating Officer in India (COO) Tarak Bajpai, were asked to furnish surety of Rs three lakh ...
New AT&T app sends autoreply text while you're driving
Chicago Daily Herald
Other smartphone versions will be available down the road, so to speak. It's available for download through the AT&T AppCenter and the BlackBerry App World stores. Surfing: The Better Business of Chicago is warning consumers about scams involving ...
http://philippines-aviation-news.blogspot.com/ 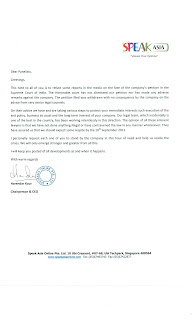 Dear Panelists,
Greetings,
This note to all of you is to refute some reports in the media on the fate of the company’s petition in the Supreme Court of India. The Honorable court has not dismissed our petition nor has made any adverse remarks against the company. The petition filed was withdrawn with no consequence by the company on the advice from very senior legal counsels.
On their advice we have and are taking various steps to protect your immediate interests such execution of the exit policy, business as usual and the long-term interest of your company. Our legal team, which incidentally is one of the best in the country, has been working relentlessly in this direction. The opinion of all these eminent lawyers is that we have not done anything illegal or have contravened the law in any manner whatsoever. They have assured us that we should expect some respite by the 10th September 2011.
I personally request each one of you to stand by the company in this hour of need and help us resole the crises. We will only emerge stronger and greater from all this.
I will keep you posted of all developments as and when it happens.
With warm regards
Harendar Kaur
Chairperson & CEO
Last Evening the Honorable Mumbai High Court rejected the extension of the police custody demand of the EOW Mumbai  police. Mr. Tarak Bajpaye our COO and the others who were in police custody till now are in judicial custody as of last evening. This now paves the way to file for their bail application. Hearing for this bail application has been fixed for the next working day of Mumbai High Court i.e.  August 16 ,  2011.
Eminent lawyer, Mr Ahmed Abdi represented lacs of panelist and showed the Honorable court the signature campaign signed by vast number of speak asia panelist. This was to state to the Honorable Court that a huge number of panelist of SpeaAsia want the company to resume its normal work as soon as possible so that they can all go back to work.
The Company's lawyers also challenged the Police arrest of Mr. Rahul Shah on flimsy and very frivolous grounds.  As a result of this his bail application would also be heard on  August 16, 2011.
Friends This is a step towards resuming our aim of empowering every consumer in our great country.
With Regards
Speak Asia Corporate Marketing Team.
Posted by Samira Surbhi at 9:38 AM 3 comments: